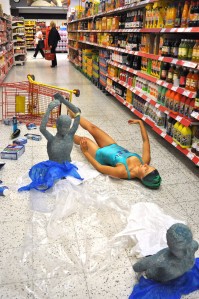 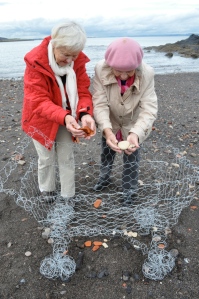 A series of site specific performances

photographs and materials used in performances

In the process the meaning of routines, social and commercial values are explored and mixed up. The audience of the work is scattered: some passed by two old ladies shopping for stones in the autumn winds, and some glanced at the supermarket isle to see swimmers in the plastic sea. The audience appeared to mostly ignore the event. The work is an experiment on limits of normality by bending the social norms of places that have common themes of routine, bodies and humanity, thus exploring what happens at the moment of surprise. Supermarkets and swimming halls are places of gathering to perform shared activities. Yet they remain anonymous, mainly without interacting with each others, safe in the familiar routines.

Fascinated by the idea of breaking the social norms of two of these places by doing “the right thing in the wrong place” I wanted to make the invisible circus of everyday life visible. Statues to joined me for a swim on a supermarket isle, and stones, like products of the sea, were gathered to fall through a shopping trolley on a beach. Exhibitions: The Brick Box – Tooting, London, 2011 The Brick Box – Brixton, London, 2012 http://www.thebrickbox.co.uk/